Gazprom Ufa has implemented
Pergam LMS for their gas

The most important thing during Compressor Station operation is early detection and localization of gas leaks that could be on the process equipment and high pressure piping. Periodic monitoring of air on the industrial sites of gas transportation facilities are made by regular rounds of staff on duty, which carries out sampling from process equipment in locations where gas accumulations could happens in the event of a leak.

Sampling is performed periodically using portable gas analyzers and provides periodical monitoring of ambient air. In addition, access to some technological components, such as compressor stations connecting nodes can be complicated due to the significant distance from the core infrastructure, the snow drifts in the winter. In such cases, most of the time staff spends on access to technology nodes. All these factors lead to the issue that the staff cannot provide full control of the equipment and to detect leaks in time, which could be a problem and lead to an emergency situation. LLC «Gazprom Transgaz Ufa» are took control under the gas transportation system with a branched structure (9 industrial branches). In addition, the company is responsible to the huge territory of pipeline and gas facilities. All this demanded to start the search for new technical solutions in the field of leak detection. The most effective solution is to use a remote laser methane detection method. The laser detectors, manufactured by Pergam-Engineering, is widely used in Public Joint Stock Company Gazprom for a helicopter survey of transmission pipelines. The operation of the laser detector in a compressor station demanded revision and adaptation for stationary applications. As a result, LMS (Laser Monitoring System) has been developed and put into operation as a stationary system of methane detection in the technological sites atmosphere and compressor stations. The main goal during creation was to achieve the following main objectives:

The methane detection system in air compressor stations technological sites called LMS is designed to detect methane in the atmospheric air. System alarms automatically in case of exceeding pre-determined levels. The device measures the total concentration of the gas in the laser beam, which is reflected by the topographical object (earth, grass, trees, asphalt, brick, etc.), that could located at a distance of 150 m from the LMS optical unit. 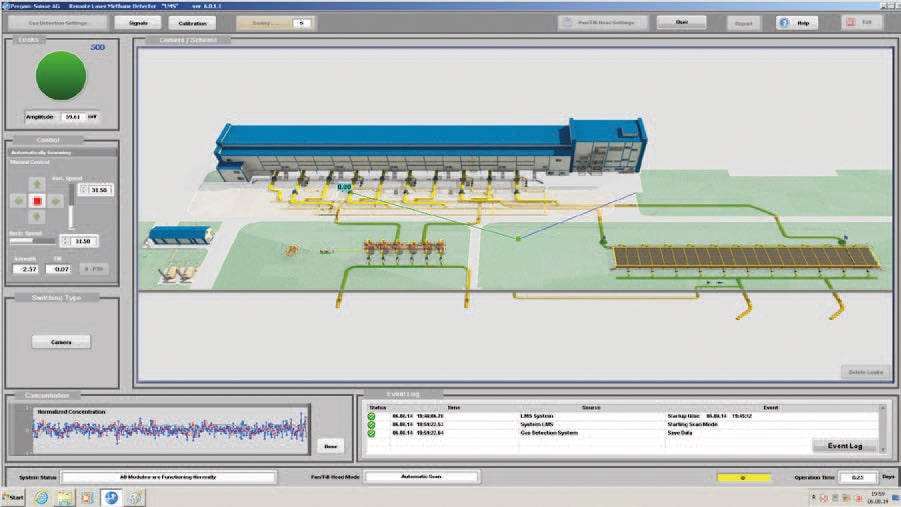 The main elements of the system LMS is an optical unit, PTZ, rack with network equipment, fiber-optic communication lines and operator’s workplace with PC. Optical unit is installed permanently on PTZ in such way that the optical axis of the receiving channel has been directed directly to the important object, which is supposed to be controlled. LMS is controlled automatic by using the PC with special software and preset monitoring road. PC is installed in the operator room and connected with the components of the optical unit (laser, photodetectors and HD camera) via a fiber optic link. System is managed by using the appropriate software created by Pergam. The calculated instantaneous methane concentrations are depicted on a real time graph, with simultaneous data recording into the computer memory and alarm events when «We used LMS during three year, and we are absolutely satisfied with the LMS system which allows us to increase our safety standard further for remote leak detection. The system is very reliable and we have decided to install LMS in our other compressor stations. The implementation has allowed us to reduce the surveillance and maintenance costs from our compressor stations» — Romanenkov Pavel Georgievich, Deputy General Director of Production, LLC «Gazprom Transgaz Ufa» a gas leak is detected. All data is stored in computer memory for post-processing and reporting. The system can be operated in manual and automatic modes. In automatic mode, the detector continuously scans the area of the compressor plant according to a predetermined route. If a leak is detected, the system stops scanning and alerts personnel immediately.